8th July 2015
What a monumental day. One of life's highlights. One of those days that will be a reference point - before and after Machu Picchu!

Another incredibly early start. We've had three 5am starts in a row. So much for being on holidays. Another lovely, fresh breakfast and we were headed up the road to grab some lunch and water before joining the bus queue. Let me say up front that the organisation of the locals and officials with regard to accessing Machu Picchu as well as experiencing it, is exceptional. The people responsible for moving 2500 up and down that road each day do a fabulous job. We queued for less than 30 minutes this morning and less than 10 minutes this afternoon.

The bus trip up is 8km over 30 minutes and zigs and zags 14 times to climb the 390m to the entrance gates. Each bus holds about 40 people and they start early. We were up at the stop just after 6am and at the entrance gate by 7.15 and in complete awe by 7.16. It's hard to describe how it looks. But the last photo I took at the end of the day, looks just like the brochures! But the beginning of our day was a completely different perspective. We quickly headed across the site and onto the Huyanupichu mountain hike. In my photo, that's the big mountain behind the ruins. We went to the tip of that. Or in our terms we "bagged that fuck off mountain". It was a huge climb, some sections with tiny thin steps at an incredible angle with no room for error. Going up was way easier for me than coming down. Little legs cope much better with stepping up big steps than stepping down them. But the view from the top, not just of Machu Picchu but also the surrounds, including snow capped mountains on the distance.

Once we reached the top we were looking down onto Machu Picchu. From miles up. At least that's how it felt. What a fantastic achievement. Even texted the kids and made the obligatory selfie video to post on Facebook. Despite 200 people being allowed onto the mountain before 08.00hrs, it didn't feel like there was an excessive amount of people all over it. We spent almost as much time at the top just photographing and having a rest, as we did climbing. Fortunately we had our food and water so we could just sit and soak it in for as long as possible. Unfortunately I completely forgot I had carried by binoculars up! At the very top I spoke quietly to one of the guides. He called himself a cheetah and we chatted about "puma solita", the way the mountain tops look like puma claws. Then we talked about the appropriateness of people being at Machu Picchu and he was indifferent about it ... Which raises a dilemma but having been there, I get a very strong feeling that there are other sites buried under thick vegetation, just as Machu Picchu was when Hiram Bingham "discovered" it in 1911. When you look from on high there is evidence of terracing in forests on the sides of other mountains. Hopefully they will remain covered and therefore not exposed to the footfalls of 1000s of people each day. The dilemma ... I went, loved it and would recommend it but it feels sort of invasive.

Our descent was definitely harder for me. It took almost as long for two reasons, either the depth of the steps or the sheer steepness and difficulty of some parts of the descent. There is a loop at the top that means going up is a less steep route than the going down which is just plain hairy. We faced the stairs and went down like descending a ladder. It was quite unnerving and seemed endless. Just to get ready for the main descent. But, we did it and we're back among the throngs of folk in no time. I'm glad we spent some time wandering in here but it's not as great an experience as I had hoped. Just the numbers of people and the restrictions to accessing the grassed areas. But still fantastic to cross the site and climb again to look back at Huyanupichu and be completely amazed that we climbed that. And to get the classic Machu Picchu pic with Huyanupichu in the background. Real bucket list stuff. And I've done it. And I've got a stamp in my passport, sore legs and a photo of me at the top, to prove it. 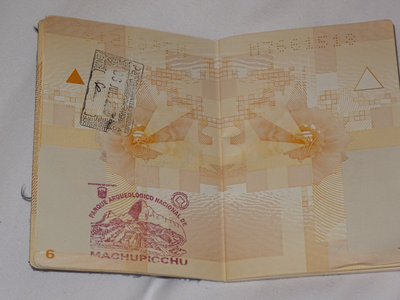 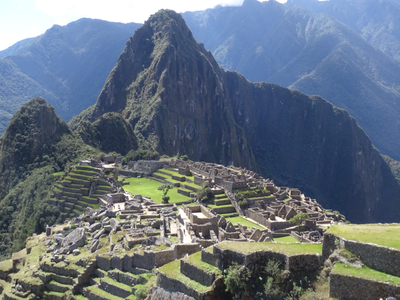 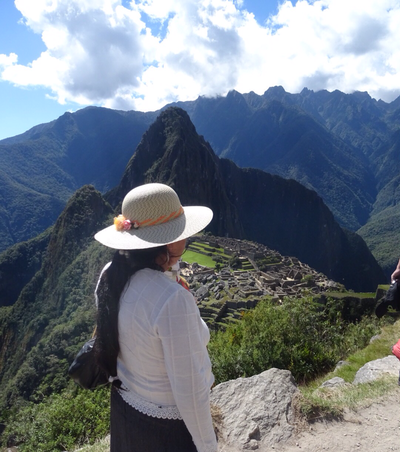 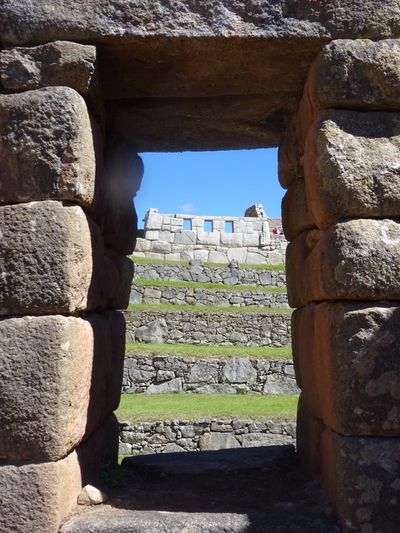 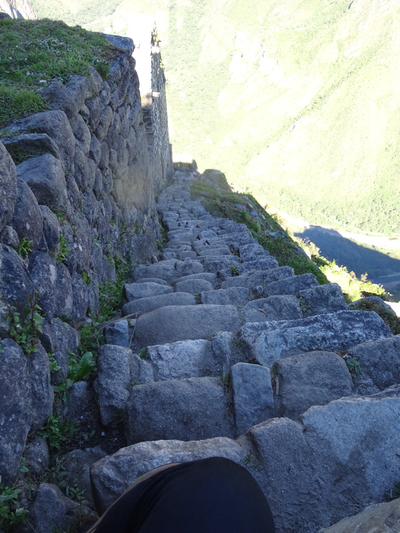 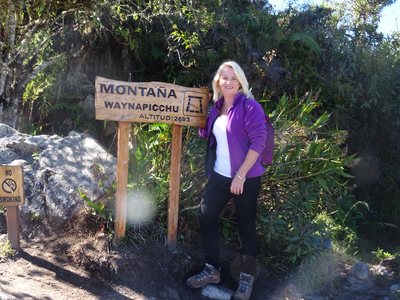 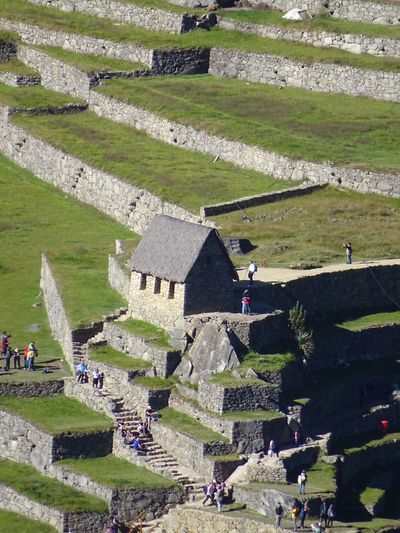 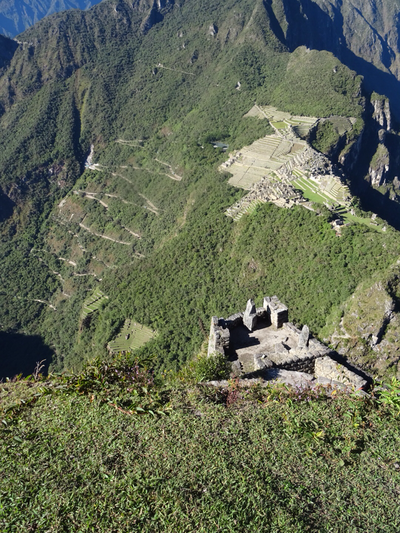 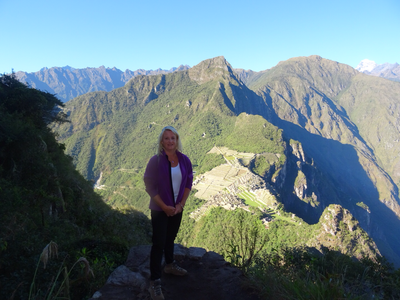 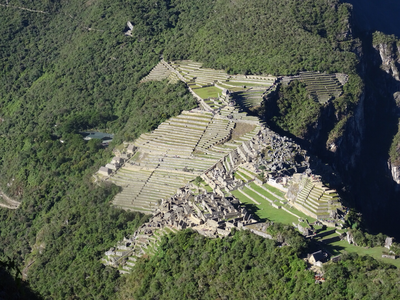 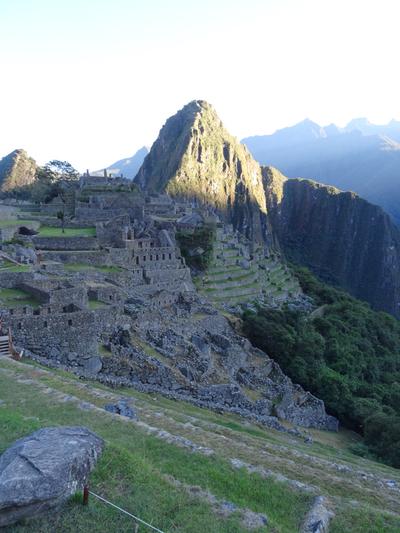 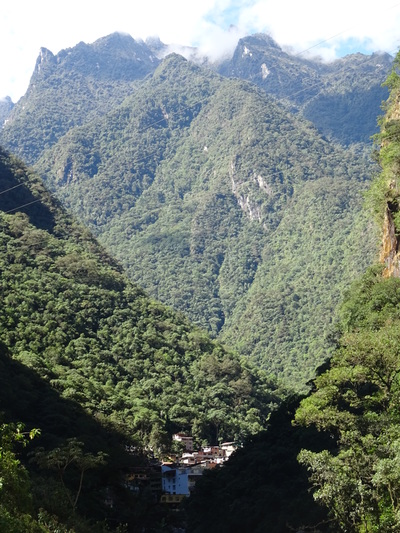 Koalas 3 and 4 have been distributed and we are back in Cuzco.
Today has been another great day filled with awe and inspiration. We started at our own pace for the first time this trip and had a leisurely breakfast before packing and checking out. Koala 3 was left there with Royer, who asked if we eat kangaroo and koala. Fortunately our luggage was able to be left in the hotel and transferred for us to the station. Did I mention that Machu Picchu Pueblo is a car free place? There is a train line running north to South through the town, and the buses cross it, taking the people to the ruins. There are no roads into the town and access via either of the rivers is not possible. So, everything comes into town on the train. That also means that everything is moved around the town on trolleys. They are speced up fridge trollies, reinforced with reo bar and weld, consistent with the lonely planets overall description of the towns "architectural tradition of rebar and unfinished cement". I actually find that element of the town very charming.

So, with our luggage safe we headed off to the foot of Machu Picchu to go to the museum and the botanical gardens. The walk took 25 minutes and was flat so my screaming calves were capable. At the start of the walk up to the ruins a family of 5 were coming down the last steps. They had set off at 05.30, walked up, toured the ruins and walked back. Good on them! We chatted briefly and exchanged gifts. Koala 4 is on his way to Columbia and I have 2000 Colombian currency units. The equivalent of one Australian dollar. What a great interaction, despite the language barrier. Koala 4 will have a very happy home.

The museum was fabulous. It was great to read about the Inkas and their construction of Machu Picchu. It answered a stack of questions I had, especially about the terrace constructions. We probably spent an hour in there but it was definitely worth it and was just as good to go after visiting the site as before. The ticket price included a wander around the botanical gardens. Not a huge space but pretty nonetheless, built on a pre invasion terrace complete with the amazing staircase that is built into the terracing.

After our morning of relaxation we headed back to town. The pictures try to show how tiny the village is in relation to the surrounding mountains. Click the last pic above and see if you can make out the tiny village. It is amazing that it thrives despite its location and accessibility. Our lunch spot was Totos cafe with a super outdoor spot, overlooking the rivers' confluence and the main intersection in town. The food in town is very good, with options from traditional dishes to Mediterranean and Asian. Drinks are more expensively priced but with everything having to come in by train it is no wonder. The big dilemma the town faces is e management of plastic. The sheer volume of bottles is hard to comprehend and the depot where they are stored is stacked 4m high with bags and bags of bottles. I guess they come back out on the train. Anyway, we had a non traditional lunch but a traditional beverage, Pisco sour. I quite liked it. A bit tequila like but also frothy. Any cocktail is a good cocktail though!

With lunch under our belts we headed for the train and found to travel backwards to Cuzco. We travelled backwards to Machu Picchu two days earlier so we got to see the other perspective. The mountains seemed to have more snow on them. They were simply stunning. We also got quite a good look at the hotel in the sky. They look like dongars stuck to the cliff face, at least 200m up. Just three of them. I have no idea how patrons get to their rooms, or for that matter why you would want to stay there. But clearly it appeals to someone. The train ride included a snack, serves but three lovely staff who then performed an entertaining dance in costume, followed by a fashion show of garments made with alpaca wool. That passed at least half an hour of the trip, as the sun set.

Now, we are back in Cuzco. Raoul's brother, Bernie picked us up from the train station and reversed us back down the hill to the hotel. I underestimated that reversing distance. It was at least 1000m and yet the hotel is less than 50m from the start of the road. I think the issue is the very tight corner into the street. It is easier to reverse 1000m, squeeze past parked cars, negotiate a narrow road and its pedestrians, than it is to turn a single corner and proceed 50m. I love the quirky things. No dinner tonight. Our late lunch and snack on the train are sufficient to last until breaky. At this stage there are no signs of altitude sickness so that's a great outcome, compared to Monday night. I'm also working in the theory of not having to digest a huge meal, thereby using more oxygen. We'll see in the morning ...
Click here to follow the next part of the adventure ...