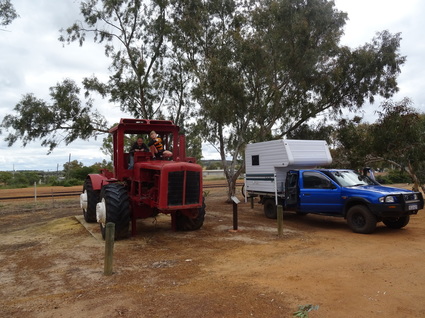 Buying a new car and camper

With the old camper gone to its new home there was a burning need to buy a replacement so that we can keep getting out and about. The budget was set and with two adults contributing to the purchase we were able to go a bit more posh. But only within the scope of the project plan. I hear you ask what is the project plan … that’s easy. Get out in the great outdoors as often as possible, as simply as possible, as cheaply as possible. With this in mind we wanted convenience to be on the road with a minimum of notice and a minimum of fuss. We also wanted to spend our dollars on fuel and sights and experiences, not on the vehicle and camper. Finally we wanted something that is set up when you arrive and can be packed up in moments. Its sounds like a big ask but with some research and patience we found what we were looking for.
The plan was to buy a slide on camper and a ute. Preferably as a package but as two separates was also an option. We started looking and quickly realised that we would be able to get more of our preferred options if we bought the two units separately and paired them up. Also, sales are usually “camper only” or “car needs work” or ridiculously priced. So we stopped looking at complete units and started considering utes separately to campers.
The ute needed to have 4 seats to accommodate The Piper and his mate. So we looked for that first and found a Mazda Bravo B2500 Freestyle 4x4 with suicide cab doors. The beauty of this ute was the extended chassis making it capable of taking a tray top usually only suitable for a single cab (1.8 x 2.5m). The procurement of the ute occurred over two weekends and many kilometres travelling just beyond the northern most reaches of Perth metro. A nervous drive home on weekend 2 (no tray) but we had the vehicle capable of doing the job. Now to get a tray. 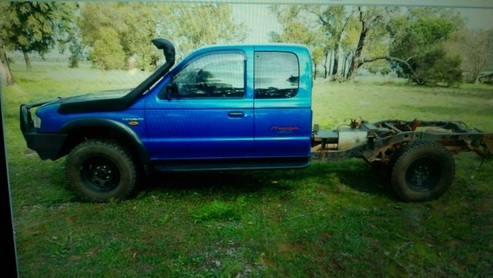 This proved to be easier than we expected with us soon becoming the proud owners of a Toyota tray (had to get some Toyota into the Mazda). The fitting of the tray was somewhat harder but we eventually got that sorted and the mud guards back on and the diesel inflow hose attached. The lights and the must-have reversing camera needed wiring too so it was fortunate I went away for a girly weekend so they could be done ;-)
Now to the exciting bit, the camper. This was a whole new ball game for us and a steep learning curve. The things to consider are rear door or kerb side door (we wanted kerb side), pop top or hard top (we wanted hard top), internal or external kitchen (we wanted internal), bed number and configuration (we wanted to be able to sleep 3), on board water, 12 and 240 volt capability, on board fridge and lots of internal and external storage. With all that in mind we considered buying a renovators delight and emailed around for a price to fit out a shell to our specs. The email read something like this …

Hi there,
We are considering buying an old slide on camper and having it restored.  I have attached the pictures of the side on as it exists now (this particular shell was $600 but they go far more expensive).
We would need:
4 hydraulic legs to lift it off,
an external awning (kerbside)
a good mattress,
fully 12 volt with 240 volt input and output,
2 burner + oven + microwave,
dinette converts to single bed,
cold water via 12volt pump – water tank plus water inlet when tap is available,
external shower (cold water),
roof racks,
as much internal storage as possible
radio + MP3 (BT),
3 way fridge,
slide out BBQ under the kerbside awning
potentially the double bed on a slider so it can become north/south at night, and slide back in during the day.
Think that's about it!  (not much to ask for, eh?!)

The return quote was at the very top end of our camper budget leaving us little cash so we went back to the drawing board and had another look at ready to use campers.
There are so many available but the key consideration, as we found out, is their weight. This is important so that the chassis and engine are capable of holding and moving the final setup. So with that in mind we started looking for a light weight camper in WA. It’s safe to say there is almost nothing available and what is around didn’t suit us. We tentatively widened the search, not sure how we would retrieve a camper from beyond the metro area, and found a 2016 model 5th Avenue, Infinity for sale in Ballarat, Victoria. Regional Victoria to Perth metro. I don’t think it could get any more difficult! But the more we looked at it, the more we liked it despite the rear door, pop top and folding double bed. So we made enquiries, sent an old friend around to have a look on our behalf, organised transportation and took delivery of our new camper. I made that sound easier than it was but it’s here now and we have had our first nervous but successful trip and we couldn’t be happier. As I always say, it doesn’t matter how you do it, just make sure you are getting out there!
December 2017

More than a year on we have had many fun and exciting trips in our rig. It has gone from being a slide on plonked on the tray to our home on wheels. We have added
You can see from the pictures how she has evolved and become the great rig she is today. 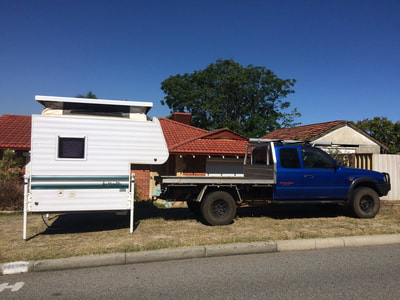 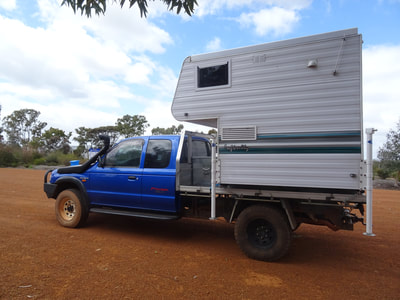 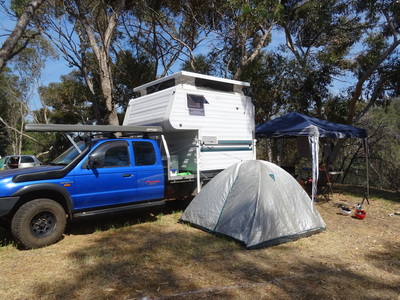 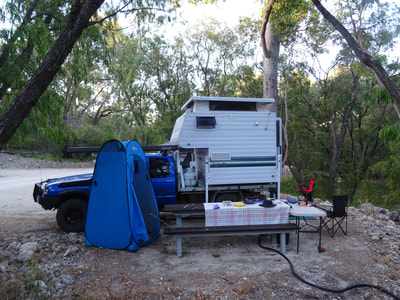 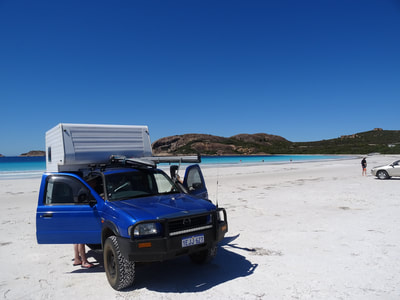 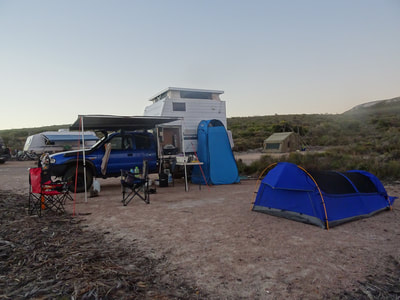 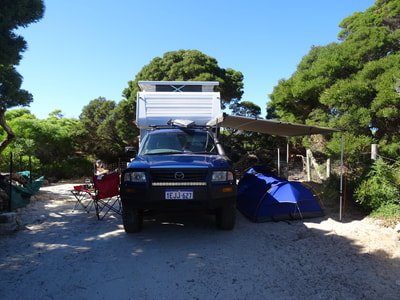 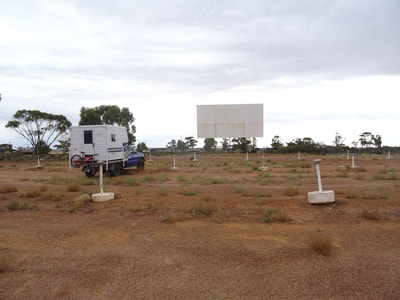 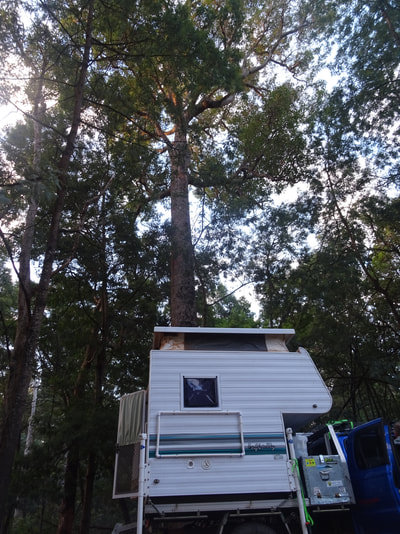 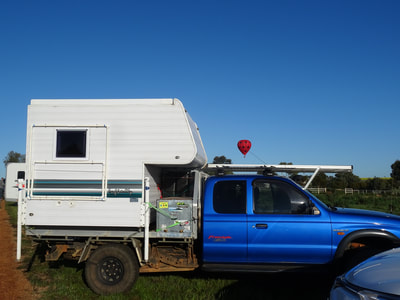 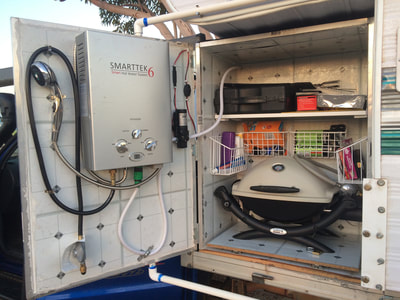 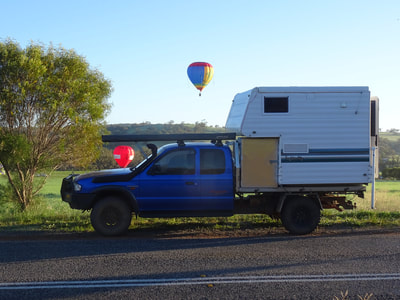 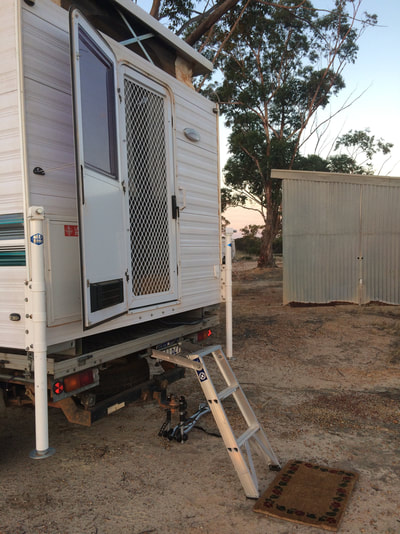 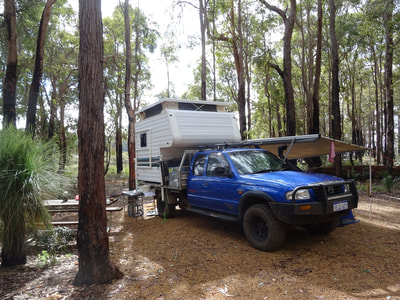 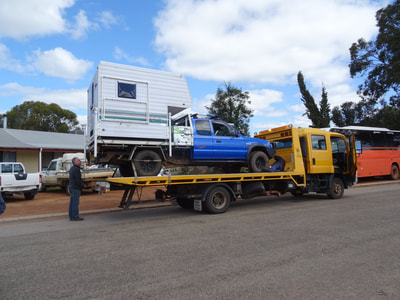